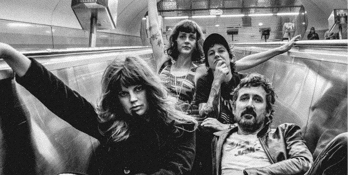 “A twisted descent into madness, all from the comfort of your living room. An ironic doomsday anthem for the year past, Tropical Fuck Storm are closing the curtains and dragging us feet first into the real life world of G.A.F.F.” ABC

Deep States mines familiar ground as well as new cultural terrains, while digging deeper into the subjective state of contemporary panic. Over the last five years, you didn’t have to be conspiratorial to see the conspiracies everywhere you turned; and Liddiard, Fiona Kitschin, Erica Dunn, and Lauren Hammel, the Tropical Fuck Storm collective, know how to make friends with the strange. They invite our paranoia and fatigue. “It’s a permanent state,” Liddiard sings, “war made the State, the State made war, what’s the point of worrying ’bout it anymore?”

Most of us have lived some inner Tropical Fuck Storm over this past year and a half, summed up perfectly with their first single of 2021 G.A.F.F.