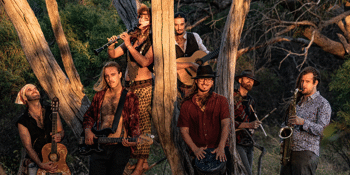 Mojo's Bar (North Fremantle, WA)
Saturday, 22 May 2021 8:00 pm
12 days away
18 Plus
Folk
Alternative
Rock
Music
Send this event to
Since their transition from van dwelling travellers to the stages of Fremantle the Witchy
Djypsies have built a reputation in Fremantle and the Southwest as a live dancefloor
sensation. Their radical blend of gypsy jazz, ska, punk and world fusion has gained them
bookings at Fairbridge Festival and the Karridale Circus Festival. Their debut album
‘Gypsyland’ was recorded at Fremantle’s iconic Poon’s head studio and released in early
2020 just as COVID-19 bought about a temporary halt.
The band was not idle during lockdown however, writing a further 2 E.P.s worth of new
music to be released by mid 2021.The increasing hype for the band’s show was proven when,
despite not playing for 6 months, their return show at the Fremantle Fibonacci Centre sold
out. This was quickly followed by a sold out show at The River in Margaret River with
Formidable Vegetable and two sold out shows at The Indi Bar and Freo Social with Tijuana
Cartel.
Now as the band’s ‘Out of Woods’ show hits the road for summer they are taking their
caravan along the coast and to the northern tips of WA with a tour in August to energise
the feet of the unsuspecting locals with fiery feet and the desire to dance.